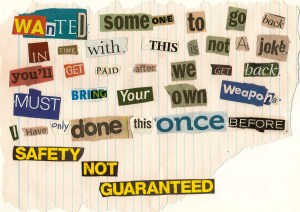 My recreation of the classified ad the movie is centered around, using newspaper cutouts.

So, I like arthouse films. However, I don’t often get to watch arthouse films, for multiple reasons, no the least of which is that they only usually show at arthouse cinemas, which are quite a bit more expensive. However, a while back, a free ticket for one such cinema came into my possession, so the other day, I went and saw an arthouse film. Specifically I saw Safety Not Guaranteed. And, off the bat, I’m going to tell you, I really enjoyed it. I enjoyed it so much, I want you to enjoy it, so this review will be, as usual, spoiler free.

The basic premise of this film is a man puts an ad in a local newspaper asking for a companion to go with him back in time. The classified gets noticed by a reporter on a magazine in Seattle, who takes two interns, Darius and Arnau, with him to write up a story on what’s going on. From there, the movie chiefly follows Darius as she is solely given the task of investigating Kenneth, the man who posted the ad. However, she can’t do this without getting extremely involved in the story herself. Kenneth accepts her and they bond as they work together, towards his aim of travelling back in time. There is also a sub-plot about the reporter, played by the guy who plays Nick in New Girl, trying to find and have a relationship with his first love who happens to live in the same town.

There are lots of things that made me love this movie, not the least of which is that it’s about one of my long-time favourite sci-fi subjects, time travel. While the movie isn’t presented as a sci-fi flick at all (it’s more of an offbeat comedy-drama), the sci-fi content is undeniable, although they do their best to diminish it. They avoid jargon, or really discussing any of the science behind the travel that Kenneth is planning, at all. However, I didn’t mind this, as it’s more or less just the scene on which the rest of the story is set.

Another thing that I liked about the movie was the characters. I’m not exactly sure why, but I felt that I could really relate to them. My life has never been quite as bad or as weird as the lives of Darius, Kenneth or Arnau, but there was elements to their situations and attitudes that rang true to me. I guess they were believable because I know people that have acted a bit like that, or I feel like I’ve been in that sort of situation before. Plus, Darius’ name and nature instantly made me think of Daria Morgendorffer, which is a complement.

There were actually only four other people in the cinema when I went and saw this, and none of them took it quite as seriously as I did. When they were laughing, I wasn’t laughing, and when I was laughing, they weren’t. They almost made me mad, because they were so like some of the people in this movie, with so little faith in the idea of something like time travel. They dismissed the whole thing as a comedy; as just a big, unrealistic joke, but that’s not right. More than just that, they were laughing at these awkward, “weirdo” characters, with no concept that there are really people like that out there. I related to these characters, and know people like that,  who believe in things, and act strangely, so I felt like I was personally being mocked by the others in the cinema. As I was walking out, after the credit had fully run, one of them asked me if I found it funny, and I skipped straight over the question, and started telling them about how the way time travel was presented in the movie actually could work. I really can’t say much more about that here, because I don’t want to spoil anything. All I can say is that one of the major paradoxes with this type of time travel is sort of solved by the end of the movie.

This movie is actually quite big on morals, some of which I just hinted at in my last paragraph. Even the subplot with Nick from New Girl looking for his lost love, while it’s focused on a bit more than I’d liked, has a moral which is nice.

I went into this movie without many expectations. I have very little idea what it was really going to be about. I hoped that it would be good, and it would deal with time travel in a new and interesting way, but I didn’t really know what to expect. I didn’t know what the characters or the setting was going to be, but the surprise made up some of the final appeal. The whole thing was just so charming, and it all came together so well.

At various points, this movie reminded me of an Australian movie called Griff The Invisible, which came out last year. In a lot of ways, it’s quite similar. A awkward guy who believes he can do something everyone believes is impossible meets a girl who helps him on his journey to complete his goal. The main differences are the setting is rural America, rather than in Sydney, and he’s trying to travel through time, rather than be invisible. Safety Not Guaranteed is also generally better executed that Griff The Invisible, however I still like Griff.

As a final note, I’d like to say that I really hope that lots of people see Safety Not Guaranteed, not just because it’s a fantastic movie, but also because I really hope that Kenneth’s time machine, which is one of the most unique and interesting time machines you’ve ever seen, as well as being fairly scientifically logical (at least going on the rules set by Back To The Future and Donnie Darko), goes down in history amongst the other famous and memorable time machines from all forms of fiction.

Have you seen Safety Not Guaranteed? What did you think? Did it live up to your expectations? Did you find it believable, funny or confusing? Did you enjoy it? Have I said anything you disagree with? Tell me & everyone else who passes through here what you think in the comment below.

P.S.
Apparently the movie is sort of based on a true story. Read about it at the link below.