My year with an iPad (and how I’m letting go) 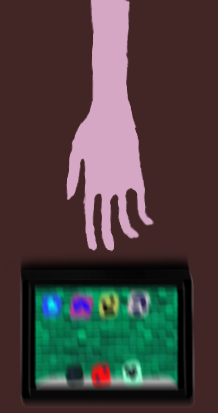 So, for most of this year, I’ve had an iPad on loan from the House, so that I could share in the iPad experience, and better support them. Now that the year, and my traineeship, is nearly over, I have to hand it back and I’m left with a few questions: Was the iPad actually any good? Did I actually use it? Am I going to miss it? Do I want to buy one, now that I’m not going to have this one anymore?

Practically every day since they lent me this iPad, I’ve taken it to work with me. And for the majority of those days, it just remains in my bag until I go home again. Most days, I don’t need to use it. I’ve got a desktop to use, so it’s only under certain conditions that I pull out the iPad while I’m at work. Often, if I bring it with me to a callout, it’s just extra bulk that I don’t need to be carrying.

The main times I do use the iPad at work are when I’m showing someone how to do something, or learning how to do something myself, or testing if something works. For example, if someone comes in and wants to know how to open PDFs in iBooks, but didn’t bring their iPad with them (Don’t ask me why!), I might show them using “my” iPad. Or if I’m writing a document on how to set up iCloud, I might use my iPad for screenshots. But these uses could be performed with practically any iPad that just happened to be lying around. Occasionally, I do use the iPad in more interesting ways for work, such as to remote into a server over the network, or remote into my desktop over the internet, or to add a temporary second display to my desktop. In situations like that, the iPad can be very handy to have, because it’s so portable. You can be nowhere near another computer, and quickly have access to yours. But just using the iPad as a window into a PC seems like a waste, however it seems to be the height of usefulness for me at work.

At home, on the other hand, I use the iPad a lot. I use it to check my emails, my blog stats, and for general quick web-browsing. I regularly use it to watch YouTube videos, and check if Lizzie Bennet, the VlogBrothers, or Nanalew have posted anything new. I also use it to watch iView, and to stream videos and music from our NAS drive, using DLNA. I sometimes also use it to play a few games (a selection of only ~5), and even to work on these blog posts when I’m on the move. I often find myself using it when I can’t be bothered booting up my normal laptop . This is partly because my laptop is getting a bit slow, but also because the iPad is more portable.

The other significant way I’ve use the iPad is when testing and exploring networks: at work, at home, and out & about. Tools like Fing and Net Master have been great for surveying networks and diagnosing issues. They’ve also led to some little adventures, like once when I remoted into a random PC, or another time when I found a unlocked router.

Overall, I guess, the iPad has been pretty good, and while I haven’t used it that much at work, I’ve enjoyed using it at home. The flexibility it’s given me has been really handy and sometimes unexpected. The thing is though, most of the things I’ve been using it for, apart from iPad-centric testing and illustrations at work, I could do just as well on an Android tablet, or even a netbook! Sure, compared to a netbook, the iPad is lighter, nicer looking, and often (but not always) easier and quicker to use. However, there are other tablets on the market that match the iPad in these areas. The specially designed apps for an iPad can be much simpler to use than some DOS command on a netbook, or often some Android apps. As long as there’s an app to do what you want on IOS, it’s probably easier to use than the app or program you would use on Android or Windows. But despite the saying, there’s not always an app for your purpose. On the other hand, with the large market share that the iPad currently holds, there are dozens of apps that are exclusive to IOS, particularly games. Nevertheless, both Android and Windows provide flexibility in areas where the iPad fears to tread. They give you a whole lot more control, which, for a tech-geek like me, is a big plus. They let you do things the way you know how, and the way you want to. And while the iPad does have some very intuitive aspects like the multi-touch gestures, other aspects like the enclosed environment of each app that can’t directly talk with any other app can be so frustrating.

What it comes down to is that, while the iPad has been good, it has also given me grief sometimes. And while it can do a lot of things, very few of them are things that it exclusively can do. Having the iPad hasn’t so much proved to me that I want or need one, but that despite its seeming shortcomings, it has a lot to offer. Using a simplistically dumb device like this is a refreshing cakewalk for when you don’t want to or can’t deal with the intricacies of other devices. And the iPad’s popularity simply perpetuates its appeal. Next year, I don’t think I’ll miss having an iPad, so much as having a device that I can watch YouTube videos on while laying in bed.

So, what’s your opinion? Do you have an iPad, or a similar device? How do you find it? Do you use it a lot, or just occasionally? As always, if you have something to say, like a response to my blog or a suggested blog topic, feel free to tell me in the comments below, using the contact page, or on Facebook.