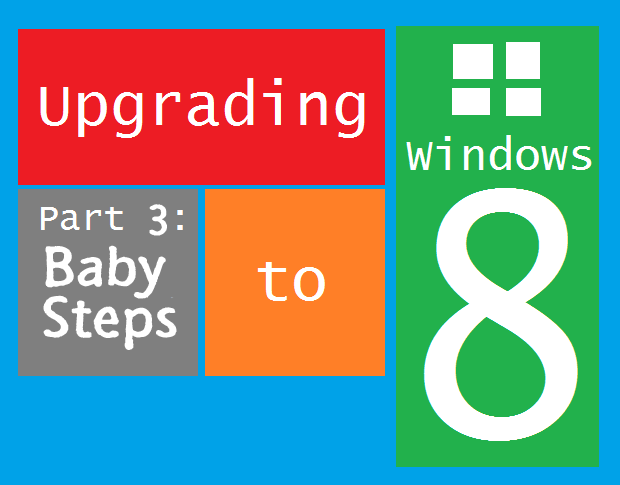 I was really looking forward to the release of Windows 8.1, as I had heard about some of the changes it was going to bring and thought they were rather better than pure Win8. My original plan had been to stick with Win7 until Win8.1 came out, and then move straight to that, but I’m happy I didn’t in some ways. It’s good to have had proper experience and perspective with Win8, but it’s totally not necessary.

Anyway, I was one of the people who was still up when it became available (at ~11PM in Australia, 17/10/13), so I started installing it nearly immediately, and left it running all night. It took ages to download and got hung up on the “Checking Compatibility” step on some of my Steam games. I think Avast may have interfered a bit with it too, trying to do its own updates. I ended up having to kill it, and restart the machine. After giving it another go the next day, it kicked in from the same spot it left off, and was all done within a few hours.
When it finished installing the update, it made me walk through a whole setup process again. Windows 8 gives you two ways to log into your computer: using your Microsoft account or using a regular local account. I decided that I didn’t like the possible security and privacy perils of using a Microsoft account (plus I didn’t really have an account I was willing to use, and I didn’t want to have to create a fresh one), so I just stuck with the regular local account, but when I upgraded to 8.1, it forced me to convert to a Microsoft account. When I mentioned this to a friend a few days later, they claimed there is an option to stick with the local account, but the way it asked and the way it hides this option, it didn’t even make clear what I was doing. So when I went to log in again for the first time, I was a bit confused why my existing password no longer worked. It was because the local account and the Microsoft account had different passwords of course, and it wanted the other one. The first things I did once I’d logged in was change it back to a local account. The biggest concern I had was with all the to-ing and fro-ing, it may have become disconnected from the existing file structure, and I’d end up with an orphaned user which had all my old stuff on it, and I’d have to start afresh AGAIN! That luckily was not the case.

Much like when I moved to Win8, I had to mess around with a few things to get them to work again after upgrading to 8.1. So much for checking compatibility, because a bunch of games crashed out when I tried to run them on 8.1, including SR3. I fixed them mostly by verifing the game files, like I mentioned in my previous Win8 post, and when that didn’t work I turned on Win7 compatibility, and that fixed it. If you just run the compatibility troubleshooter, it usually works it out. 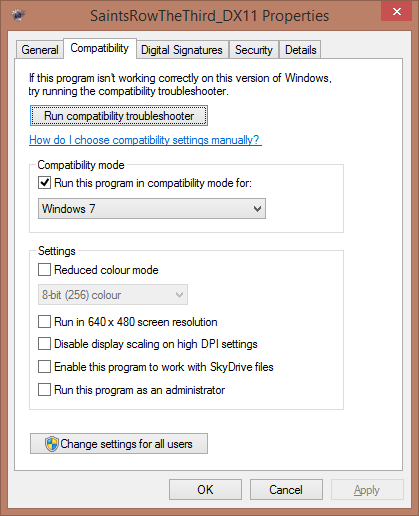 In Win8.1 Microsoft have tried to replace their recent “innovation” of Libraries with SkyDrive/OneDrive. And while I never really like them that much, because they’re buggy and fickle, I do use Libraries and rather have them than have everything on my computer being constantly synchronised with some mysterious cloud location. By using a local account, SkyDrive/OneDrive integration was disabled by default because Windows doesn’t know who you are, and therefore can’t log into your account. I’ve heard if you’re using a Microsoft account to login, disconnecting SkyDrive is a bit more complicated… Libraries is easy to re-enable; you just tick the “Show libraries” option under Navigation Pane options in the View menu in Explorer. Although, If you have Libraries enabled, then any Explorer window you open defaults to the Libraries menu, where I’d much rather be sent to My Computer (or whatever they’ve changed the name to this time…). So what I did was I enabled them, saved the Libraries folder to Favourites so I can get to my Libraries by simply clicking on that, and disabled them again.

Win8.1 makes various minute, but appreciated improvements. Probably the most obvious, but insignificant change that 8.1 brings is the reintroduction of a Start button again at the bottom left corner, on the taskbar. To me, it’s a welcome addition, which I had been looking forward to, but really, it wasn’t that important to me because I’d already reproduced it using another program, as I mentioned in my original Win8 post. Another fairly insignificant feature is the new ability to set your desktop wallpaper as the background for the Start Screen. And although it seems fairly pointless, it does add a desired sense of continuity between the desktop environment and the Start Screen menu. For me, it’s just another way to further customise my Windows experience, to express a little hint of my personality.
This isn’t the only customisation option that 8.1 has added. You can now choose from a much wider, more precise range of colours for the menus and interfaces. While some of the combinations looks cool, it takes a bit of trial and error to find one that is clear, functional and stylish. You can now also setup the lock screen to shuffle through a slide show of photos of your choosing. If you’re using SkyDrive, I think it defaults to any photos on there, otherwise you can set up a Library specifically comprised of the photos you want it to show, like I did. Mines actually just set to rotate through my extensive (over 1,000) wallpaper collection, but you could set for any sort of photos you like. It’s a nice touch, when it works, which seems to be a bit hit and miss for me. I think it may have something to do with my power settings, but I’m not quite sure what.
Further customisation and control has also come to the Start Screen, where you can now resize icons to one of 2, 3, or 4 sizes, depending on what they are. Regular pinned desktop programs can be either medium (which is the size everything was before) or small, which is a quarter of the size. Any app can be small, medium or wide (double the size of medium), and apps with Live Tile abilities can be small, medium, wide or large (4x the size of medium). It’s super handy being able to resize icons like this, for when you find that you’re really not using something that much, or you just want to squeeze a few more things on the screen. Although, with all that squeezing, I find myself often wondering why I have half this stuff pinned at all. For me, the main features of the Start Screen are the Live Tiles, which I mainly used as news tickers. Other than that, it’s really just a bunch of pretty pictures. 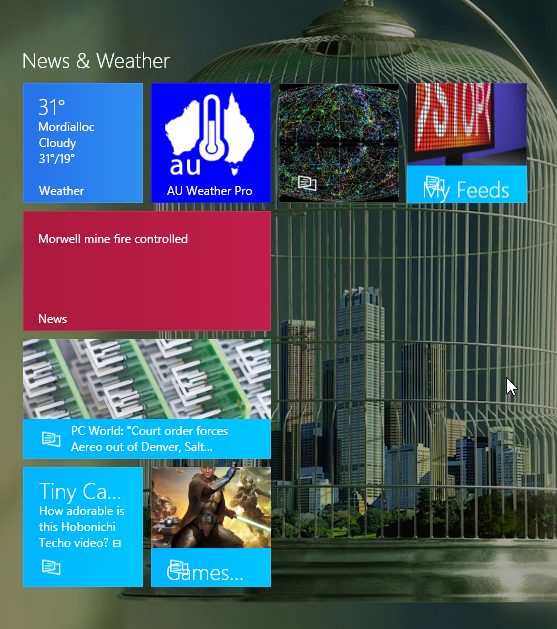 One of the most useful additions in Win8.1 is one I hardly even noticed for quite a while, but is something that I suggest anyone using a Win8 or 8.1 machine should look into. When you install 8.1 it automatically updates and installs a number of apps. One of the new apps you’ll find is called Help+Tips, and it contains basic information and instructions on how to do various tasks in Win8. It’s fairly simplistic, but it’s fantastic for those who are new to Win8. 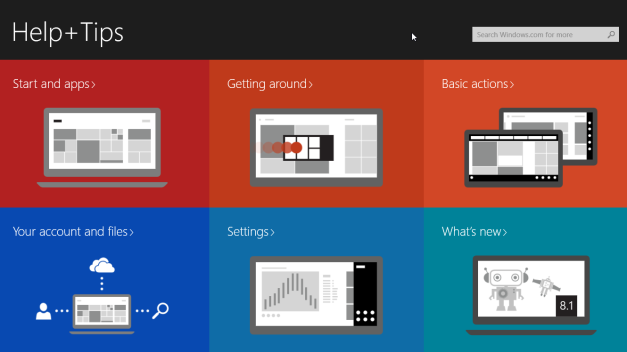 The other most useful addition is what some call the Power User menu, found by right-clicking on the new Start Button, or by pressing Win+X. It’s a handy menu, providing quick access to most system utilities like Event Viewer and Device Manager, although most users mainly just use it for shutting down.

Probably the most aggravating thing with Win8.1 is how terrible search is. I find search to be very hit and miss, sometimes finding the program you’re looking for, but often returning a bunch of unrelated junk you didn’t even know you had installed. Search autocomplete adds to the frustration by filling in whatever it wants, rather than what you want, like it’s trying to convince you that it’s results really are good.
This is especially true when trying to search for system settings which nearly never work unless you specifically select Settings as your search scope. I’ve also never seen a file be returned as a result unless I select Files as the scope. Which means that “Everything” actually means “A small selections of programs our indexer managed to find”. I admit, it might just be me and my computer because I’ve tried 8.1 on other computers and it’s been able to produce better results than mine, but that’s not always the case.
There are a few other changes that have been made, for no apparent reason, such as if you want to search an app, you now have to actually be in that app, which seems logical. But it was more convenient before where you could search any app by simply choose it from the search menu, or maybe even from the Everything option, if it ever worked!!
All visible signs of the Windows Experience Index tool have been removed, which is a bit of a loss, but for the most part don’t matter. If you ever feel like you miss it, or need it again, the underlying program can be access from command line or by using WEI Tool created by Sergey Tkachenko.

Win8.1 really doesn’t change that much, but what it does bring are more than welcome tweaks. If you’re using Win8, or are planning on moving to Win8, I see no reason you wouldn’t go straight to 8.1. It gives better control, customisation options, and overall a better user experience, even if it isn’t so different.