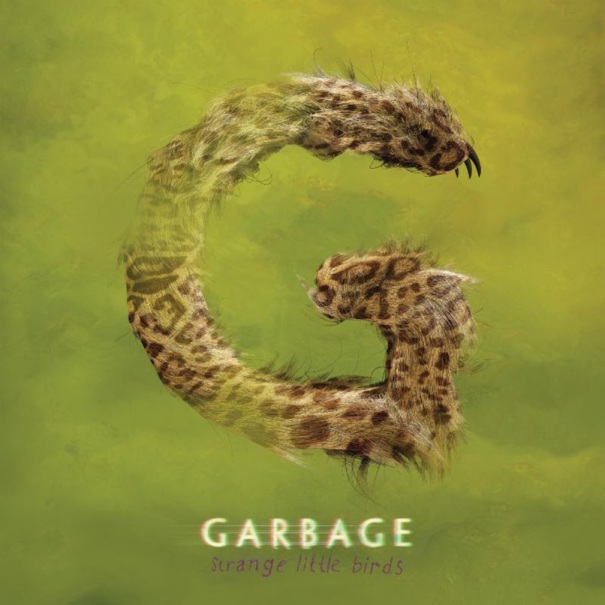 For the second time since their big hiatus, Garbage has released a new album. And just like last time, it totally snuck up on me. So after a time of avoidance, focused listening, and carefully consideration, I have a mixture of thoughts in the form of this review.

Saying that Strange Little Birds snuck up on me again is somewhat inaccurate. It’s not so much that I didn’t know it was coming, as much as I wasn’t prepared for its arrival. As indicated by the severe lack of new content around here, I’m back in the thrall of Uni pressure, and this album landed smack-bang in the middle of exams. Thus I had no time to devote to properly enveloping Garbage’s latest offering until recently, and had to avoid it so I could go in untainted. Anyway, enough excuses, let’s get on with this review!!

As with my other album reviews, I’ve written what previous song/s each track reminds me of (the album it comes from is in the brackets), and ranked it on this album, as well as writing a short comment about each track. Plus there’s an overview of the album as a whole at the bottom.

Reminds me of: So Like A Rose (Beautiful Garbage), Metal Heart (Bleed Like Me)
Rank on this album: 10
The album opens with immersive, strong cello tones, before turning to an intense thudding beat. The cellos comes and goes throughout, to give the track a bit more depth and redemptive warmth. As for the singing, it’s almost a spoken track, with Shirley’s words ringing simply.

Reminds me of: Why Do You Love Me? (Bleed Like Me), Bad Boyfriend (Bleed Like Me)
Rank on this album: 1
Every element of this track makes it feel like a classic Garbage song: A tricky, solid drum beat, a nifty guitar riff, strong bass support and Shirley’s rising, victorious vocals. She shows off her vocal prowess in this one, toying with unexpected pronunciation. As a first single, it’s a strategic choice that shows they’ve still got it.

Reminds me of: My Lover’s Box (Garbage), Nobody Loves You (Beautiful Garbage), Dumb (Version 2.0)
Rank on this album: 9
A gruff and sultry track that seems to stretch on forever, full of peaks and troughs.

Reminds me of: Sugar (Not Your Kind Of People), Medication (Version 2.0), Milk (Garbage)
Rank on this album: 11
This track has a tender set of vocals, offset against a background full of electronic buzzing and hissing, reminiscent of the panic noises from Orphan Black. I like the idea, but overall the extra noise is unpleasant and unnecessary. It wreaks what could’ve been one of the softer tracks on this album. An alternative mix, with less distortion would be more enjoyable.

Reminds me of: Temptation Waits (Version 2.0), Happy Home (Bleed Like Me), Drive You Home (Beautiful Garbage)
Rank on this album: 6
Sounds of rain and road noise set the scene, quickly giving way to a sharp guitar riff. From there, this song just gets better and better, with very deliberate and sultry vocals, piano backing and Theremin noises rounding it all out.

6. Even Though Our Love Is Doomed

Reminds me of: Fix Me Now (Garbage), Right Between The Eyes (Bleed Like Me), I Hate Love (Not Your Kind Of People), Battle In Me (Not Your Kind Of People)
Rank on this album: 2
After a few seconds of alarm clock-like buzzing, this track really open up into another Garbage classic, this time more in the electro vein. This track is the one that really restored my faith in this album when I first heard it. The only thing that brings it down is the ever-present background distortion that appears on many of these tracks.

Reminds me of: Big Bright World (Not Your Kind Of People)
Rank on this album: 7
A joyful song full of intense drumming, with a crazy guitar fall off to close.

Reminds me of: Control (Not Your Kind Of People), Shut Your Mouth (Beautiful Garbage)
Rank on this album: 4
A totally hectic track full of thrashing drums, shredding guitar, electro effects and powerful vocals. There are multiple guitar breaks that sound like Jack White crossed with Skrillex, all psychedelic and crazy.

Reminds me of: When I Grow Up (Version 2.0)
Rank on this album: 8
Haunting and atmospheric track that musically and lyrically compliment When I Grow Up, with Shirley singing “I’m all grown up” and even a reminiscent riff being used.

Reminds me of: Cup of Coffee (Beautiful Garbage), Silence is Golden (Beautiful Garbage)
Rank on this album: 3
This song really is an epic, not only in length but in the sound journey it takes you on. It sounds a lot like a typical Garbage track, but slowed down. I liked the use of hisses as percussion in the earlier half. It ending is the perfect way to close the album: with a rousing crescendo that suddenly disappears leaving Shirley’s breathy, melancholy tones as the last thing your hear.

The overall sound here seems to lean more toward Garbage’s wilder side, as seen through the various b-sides (or g-sides, as some call them) they have released over the years. Some of their more recent singles have also pointed in this direction, so I guess it shouldn’t be too much of a surprise.

The most striking difference about this album compared to Garbage’s other work is the somewhat heavy-handed use of distortion effects and dubstep-like tones. At first, it gave it a primal feeling, rough and wild. It also helps to give some of the songs a deeper, bassy body. However, after a while constantly hearing these sorts of noises got pretty grating and annoying. No song seems to escape their presence, however only some benefit from it. For the rest, it ranges from a trifling distraction to actively ruining the songs.

Many of the songs on this album feel like epics, for two reasons. For one, they’re all quite long. In fact, half of this album’s tracks are over 5 minutes long. That’s as many 5+ minute tracks as on all of Garbage’s previous albums combined. Strangely enough, this album also holds Garbage’s shortest song, in the form of the opening track, which serves as a sort of prelude to the rest of the album.

The other reason these songs feel so epic is that, more than ever, their themes seem to shine through. I’m not sure if it’s just me, reaching an age where I can finally appreciate some of the ideas and emotions that are being alluded to, or if they really have doubled down on it. Garbage’s music has always covered the whole gambit of human emotions and the human condition: love and lust, self-identity, loneliness, pain and torment, growth, relationships and depression. But on this album, it just feel more present and intense than ever before. It has a sort of concept album feel, although I’m not sure it creates a totally cohesive narrative.

It’s always good to hear more new, exciting music from one of my favourite bands ever, but a lot of Strange Little Birds missed the mark for me. Although most of the songs were good, many of them were dragged down by superfluous effects and noise. Remixed, this could have been their most emotional and affecting album yet.

For another opinion, have a read of PopMatters.

So, have you ever heard of Garbage? What’s your favourite of their songs? Did you pre-order Strange Little Birds? What do you think? Did it live up to your expectations? Have I said anything you disagree with? Tell me & everyone else who passes through here what you think in the comment below.