For me, this year was the fifth Free Comic Book Day I’d been to, however for the people I went with, this was their first time. My four friends had all never been before, so I gave them the tour, and it didn’t exactly turn out as I expected.

Free Comic Book Day is an event held by comic book stores across the world on the first Saturday in May each year, where they offer a number of free comics to patrons, usually without even making a purchase! Often it’s accompanied by a bit of a festival or celebration which the stores throw to try and encourage visitors to lay down some cash, and get involved in the day in various ways, such as by dressing up (cosplaying), or getting a caricature drawn of themselves.

To be honest, I wasn’t all that excited about FCBD this year. It’s probably because I’ve been going to Melbourne’s comic book shops a lot more often (sometimes weekly) in the last year, and I’ve picked up a pretty wide variety of comics from the bargain bin. So acquiring comics isn’t such a novelty anymore.

The other factor was that there was only a few interesting FCBD comics on offer this year, and I’ve already got most of the good stuff from previous years, so there was less motivation to hop from store to store, trying to collect everything.

Despite that, I was determined to make this a good one for the people who were coming with me. My brother couldn’t make it this year, so I decided to go with a group of friends. Based on previous years, I made a plan to get in early to beat the crowds, and give my more indecisive friends time to explore. Some weren’t willing to get up super-early, so we ended up splitting into two groups, with the early-risers and I hitting an extra store before the others arrived.

Ironically, this year was the first year I’d made an effort to dress up for the event. I didn’t want to go full-on cosplay, so I created a Squirrel Girl-inspired outfit, just using clothing I already possessed. I don’t think anyone really noticed… 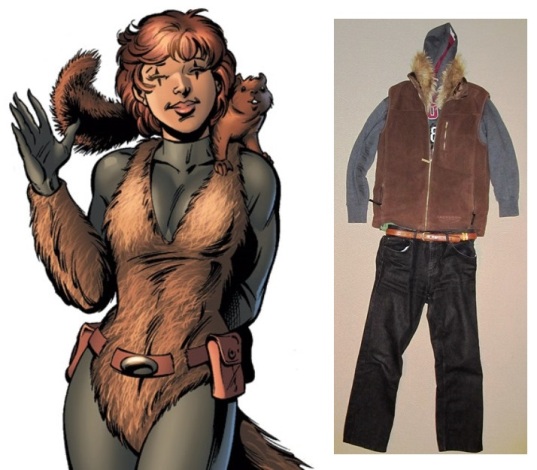 The early-risers and I got to Minotaur at about 8am, to find only about 60 people in the line, which was quite a few less than last year. I thought it might have just been because we were a bit earlier than last year, but I don’t think the line ever grew to over 100 people before opening. Once Minotaur opened at 9am, there was next to no waiting. They didn’t even parade the line through the whole store, like last year. We were all done by 9:20am, and that included a substantial chunk of browsing time.

Minotaur’s setup was essentially the same as last year. The first 30 people in line got a bundle of all of this year’s FCBD comics, and the first 150 got a swag bag with their selection of comics. We were well early enough to get goodie bags, and I think my friends quite liked their goodies. I wasn’t so impressed, because I’d managed to pick up some of the stuff throughout the year, when it had been on offer as promo material. We picked 5 comics each from the available range, which included every comic on this year’s FCBD list, with family-friendly comics marked as such.

While Minotaur’s participation this year was as good, if not better than last year in some ways, they did disappoint me because they seemed to have changed their mind on some of the advertised attractions, such as the lucky dip and the extent of the sales discount for the day. It wasn’t a deal-breaker, but it was a bit of a rude surprise.

By the time the rest of my friends arrived and we made our way to Classic Comics, it was about 10:30am and it was very busy in there. In fact, it was probably the busiest I’d ever seen that little, cramped store.

Classic Comics also used the same setup as usual, with comics spread throughout the store, but with a bit of extra shelving to allow them to lay out more. However, this shelving was a bit low to be easily accessible, maybe because it was aimed more at kids.
Each person could choose 3 comics, plus more if you spent money. The big problem Classic Comics had was that, as we walked in, no one provided any sort of explanation of this system. Having been through this a few times, I knew the routine, but my friends didn’t. This really made me realise how confusing it potentially was for newcomer. Many people, including my friends, couldn’t tell the free comics from the paid ones. To them, they were all just comics, and they we spread out everywhere. Minotaur clearly wins on this front, with specifically better signage and explanation from staff.

Classic Comics’ range was better this year, with more of this year’s FCBD catalogue available, plus plenty of Halloween Comicfest comics. This quality range was diluted by the large number of previews that were also included as offered comics, which I felt was a bit of a dirty trick. 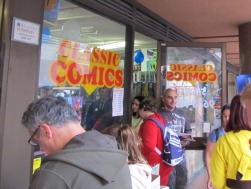 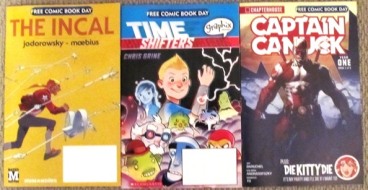 We visited Comics-R-Us last, at around 11am, and they really surprised me this year.

While they used generally the same setup as usual, where people pick the comics they want from a display board, it seems to work much better. At first I thought it might have been because the place was pretty quiet, the line was short, or maybe somehow only having one person serving up the free comics flowed better. However, what I think really made the line keep moving was allowing each person to pick 3 comics, as opposed to 2 as they’d done every other year I’d visited.

Although Comics-R-Us still didn’t have many things from this year’s FCBD offering, they had a better range than usual as well. Having comics available dating back 2+ years was perfect for newcomers, although the high number of duplicates in the same series, or with similar names lead to a fair amount of confusion and frustration on my friends’ part.

We ended up spending the rest of the day in the city, and I saw lots of people walking around with FCBD bags, so it seems that a fair number of people went, just not with the usual early rush. If you are thinking about going next year, my advice is: do, even if you can’t go early, it’s still worth it. Especially if you don’t normally read a lot of comics.

Overall, it was a very quick and quiet year, with me picking up 12 comics in total. My favourite of the bunch was probably Betty & Veronica, although I was surprised by how much I enjoyed Faith. If you want to see what I thought of more of the comics I grabbed, or other comics I read, you can follow along on the League of Comic Geeks.