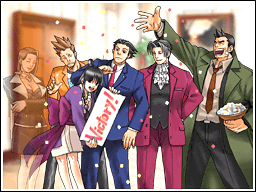 ⇈This image is not mine. It is an official image ripped from the games. Click on the picture to go to my source.⇈

So, a few days ago I went and saw the Ace Attorney (Gyakuten Saiban) movie with a few friends. I’m a BIG fan of the video game series, so I was quite excited and looking forward to seeing what they did with it. And I wasn’t disappointed.

** As usual, this review should be spoiler free. But if you’ve already played the games, you already know most of what’s going to happen.**

Ace Attorney is a live-action Japanese film adaptation of the Japanese Capcom game Phoenix Wright: Ace Attorney, which is the first in a rather large series. In the games, you play the title character Phoenix and go about solving court cases and striving for truth and justice, using logic and by finding contradictions in witness statements.

All four cases from the original first game appear in this movie, but some of them are only fleetingly seen. That said, it’s done with a purpose. This movie is made to feel like a crime drama, with smatterings of neo-noir but also comedy, and it’s pulled off brilliantly. However it comes at a price, in a way. It means that they focus in on the cases that lend themselves best to this. But it also means they have the time to expand further than the game did into the backstory and motivations, the emotions and tragedy that surround those cases. You don’t just find out who and why, but how and what lead them to that. There are a few eerie, creepy sequences to go along with that, as well as a few pretty crazy and erratic ones taken from the game. For the most part, it doesn’t feel like a video game movie, but a film built on its own worth.

Like I mentioned, the film is Japanese and thus is both set in Japan and spoken in Japanese. This meant the whole thing was subtitles. Before we saw the film, my friends and I were talking about how it’s probably too new to have an English dub yet but, after seeing the movie, I couldn’t imagine it with an English dub. It somehow just seemed to suit it better that it was in Japanese, and the subtitling was so good that it didn’t matter. The subtitles use the localised English names from the games rather than directly translating the names from the Japanese,  and even took into consideration particular accents and wordplay used by the characters, such as the American accent of Lotta Hart or “That’s right, Wright” pun that occurs regularly.

If you’ve never played any of the games before, this movie probably wouldn’t be as entertaining, and could be considered rather weird, and both badly acted and cheesy in places. And this comes down to the fact that this film pay a lot of fan-service. There are frequent jokes and absurdities that either reference or borrow directly from the games. However they’re done in such a way as they fit into the storyline, not detracting from the mood and power of the rest of the film. I was so glad to see the way they used the fact that it’s set in the(no so distant or different) future to incorporate some of the game elements that wouldn’t have fitted otherwise. For example, the use of large holographic screens in the courtroom to announce the verdict, to match the way words just appear across the screen in-game.

Having said that, many fans would say that there were some things missing. One thing I was a little disappointed by was the lack of Phoenix’s characteristic confidence and finger-pointing while delivering the line “Objection” at the top of his lungs. It does occur, but not enough. Other missing gestures are Detective Gumshoe’s confused head scratch and Maya’s general excitability at everything. They are seen, but not nearly as much as I would’ve liked. Furthermore, some characters don’t appear at all, probably most notable Oldbag is never seen, as far as I could tell. However, the audience in the courtroom is full of wacky looking people, so it’s quite possible a few of them are suppose to reference characters from the games. Similarly, the classic Ace Attorney music is incorporated with a variety of new tracks so that it’s not always there but always familiar. There are a few plot deviations from the game’s storyline, but that just keeps fans on their toes.

The only serious criticism I have of the movie as a whole is that there seems to me a few instances where not enough explanation is given as to what’s going on or has just happened. It’s s if there’s a voice-over they didn’t include in the subtitles. Most of the time, a fan can pick it up from their back-knowledge, but a non-fan may have been lost. Even as a fan, I would’ve like the reminders.

Overall, a brilliant adaptation of a well-loved video game favorite to many. Not only that, it stands on it’s own as a solid crime movie, with bits of comedy. I would happily watch it many times.

Have you seen Ace Attorney? Are you a fan of the games? What did you think? Did it live up to your expectations? Have I said anything you disagree with? Tell me & everyone else who passes through here what you think in the comment below, or on the Facebook page.

In other news, I bought a Raspberry Pi this week. I’ll tell you more about that when it arrives…