Why Did You Grow A Beard? 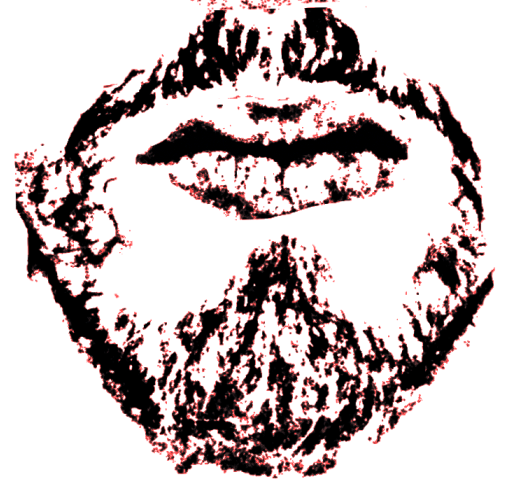 An abstract, thicker-than-true version of my beard.

“Because I wanted to”, is the simple answer to the question in the title, however things are never that simple. After reaching my goal time-period of six months of beard growth, it’s time to stop and think about what’s going on here, on my face.

Like I said, I’ve been growing my beard for six months, and I think that’s the longest I’ve ever had facial hair for. I have had bits growing before that, but nothing ever lasted very long, mainly because I didn’t have the endurance to wait for it to grow out past the straggly, ugly early stages (although how beautiful it is now is often up for debate) and we weren’t allowed to have facial hair at school. Without thinking about how I wanted it to look, my facial hair naturally formed what’s known as a Van Dyke. A Van Dyke is a goatee and a moustache, connected at the sides by, in my case, a particularly scraggly line of hair that just loves to try and get in my mouth. At its longest point, on my chinny-chin-chin, I estimate the hair is around 3 cm long, however, I’ve been keeping it so that it doesn’t extend much past the end of my chin, so six months growth would actually be much longer.

So the question that we return to is, “Why?” Well, facial hair, just like other style and fashion items like clothing and Apple products, are a form of shorthand for conveying and perceiving things about a person’s character. I’ve always quite liked the look of facial hair, for the manliness it brings. In particular I like the 5 O’clock Shadow and the Classical Moustache. I think the reason being is that I like what they represent.  In the case of the 5 O’clock Shadow, it conveys an air of suaveness, charm, smarts, and it goes nicely with a suit.  Similarly, a Classic Moustache represents an old-fashioned but gentlemanly way. That was, until it was adopted as an emblem of hipster culture.

Unfortunately, as I mentioned earlier, neither of those is what I have actually grown (well I do have a sort of a moustache~, but it’s pretty wispy), and so, it seems time, after 26 weeks of growing, trimming, and fussing, to get rid of it. Or at least minimise it down to just the moustache. Although, I fear that’ll make me look even sillier than now.

My family have been nagging me this whole time to get rid of it; they don’t like it at all it seems, and reviews from others haven’t been that favourable either. Overall, if my facial hair was a movie, it’d get about a 48 out of 100 on Metacritic.

Hey, look at that! A comment b0-x! If you want, you can tell me about what you thought of my blog, or tell me about your beard (if you have one) or what you think of beards in general. I’ll be happy to hear from you, whichever you choose! And if you have an idea about what I should write about, tell me! I’m keen to know!

2 comments on “Why Did You Grow A Beard?”