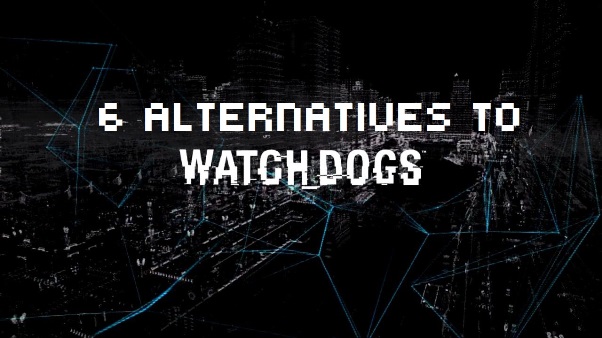 As a tech-head and hacking culture enthusiast, I’ve been waiting with bated breath for Watch_Dogs ever since I heard the concept: a sandbox Chicago where you play as a hacker who leverages the world around him with his hacking skills. However, when Ubisoft released the system requirement for it, I realised I would be waiting a bit longer if I wanted to actually play it. So I made it my mission to find a bunch of games that I could play without upgrading my PC that would give me some of that Watch_Dogs experience.

So, as you may know if you’re a regular reader, I got a laptop at the start of Yr12 (in 2011), which I upgraded to Win8 mid last year, and am still using today as I write this. It was a pretty okay machine at the time, but it was never built for gaming. It has a dedicated video card, but that type of technology is moving so fast it was outdated when I got it.

After seeing the minimum specs suggested by Ubisoft for running Watch_Dogs, I could see that my laptop didn’t mean nearly any of the requirements. The only thing it had going for it was it had double the required amount of RAM because I had upgraded it around the same time I upgraded to Win8. The obvious answer was to get a new computer, but I don’t really have the money for all that. Plus, this one’s still got a lot of life in it, and I’d hate to see it mothballed for no good reason. So I set out to find some games that my machine could run, that were somehow similar to Watch_Dogs. And this is what I came up with…

NOTE: In full disclosure, I ought to mention that I’m pretty flaky when it comes to actually finishing games, so most of the games below I haven’t finished as of writing this. Although, that’s sort of the point. Just to make it clear for you, I’ll mark games I’ve finished with a +, and games I’ve never played with a !. All the rest, I’m part way through.

NOTE x2 : Most of this article was conceived/written before Watch_Dogs came out, and before I had played a bit of it (turns out that my “too weak” machine can actually run it, albeit at pretty low quality). So some of the things I say below may not line up with what people are saying these days about Watch_Dogs. I may eventually directly review it, but for now here are some alternatives!

What it is: A series of hacking simulators focused around exploration and a command-line-based interface which ranges from a modern-day style to futuristic to GUI-based and something slightly more realistic. The three game series is set over a semi-continuous plot about a hacker who invents a powerful AI.
Why it’s like Watch_Dogs: Hacking, hacking, hacking… that’s all there is to it!
Why it’s good: It’s a chance to be the Hollywood-style hacker you’ve always wanted to be. The graphics are pretty cool, and the exploration elements allow you to get lost for ages.

What it is: A open-world third-person action game focused on melee, where you play as a Chinese-American undercover cop, whose job it is to infiltrate one of Hong Kong’s biggest triads.
Why it’s like Watch_Dogs: They’re both set in Modern-Day, Real-World Open Sandbox Locations, in this case it’s Hong Kong, while in Watch_Dogs’ case it’s Chicago. But that’s not all! With these giant towns, both come with tonnes of Side-Missions and Activities To Do At Your Leisure. They both also have a Reputation System, indicating how you’re viewed by the public. Oh, and they’ve both got “…Dogs” in their title.
Why it’s good: Well, I don’t know yet because I haven’t played it, but according to a trusted friend “it is a good game [because] unlike most games like this [in the sandbox/open-world category], you ARE A GOOD GUY”. He says that it has a lot more depth “with the cop aspect”, where you play different missions on opposing sides of the law, making “missions and combat better”. He reckons it’s a “7 out of 10, but because of the storyline, [he gives] it 8 out of 10”.

What it is: A zany, over-the-top action shooter that lets you play as the leader of a street gang that’s risen to power as guardians of the city. Dispense vigilante justice of the most wacky and violent sorts, using a massive variety of weapons, from the inventive to the downright stupid.
Why it’s like Watch_Dogs: Well, they’ve got an Open World, with Cops & Gangs that are Constantly Chasing You. Also, SR4 has a whole bunch of rubbish Hacking Mini-Games, but that makes it more like Bioshock than Watch_Dogs.
Why it’s good: While these games are the type I’d normally never go near because they’re too vulgar, violent and just generally not to my taste, I’ve fully played both, and actually really enjoyed them both. There’s just something so fun and exhilarating about being able to steal any car you can find, drive around like a maniac without a care, and just stunt jump out of it when it’s about to explode. Taking on endless waves of thugs with ridiculously overpowered weapons is a great stress-relieving exercise. SR4 takes tonnes of inspiration from sci-fi and super-heroes which are two things I like anyway. And with this, it adds super powers, allowing you to mega-jump and glide everywhere, as well as run “faster than a speeding bullet”. What’s not to love! Sure, there’s a lot of swearing and inappropriate content, but if you can look past it, Saints Row is outright loony fun!

What it is: A 2D stealth platformer, where you play as a PI with long-fall pants that allow you to do giant leaps. It’s your job to infiltrate a number of secure locations, which you do by hacking the environment to distract and incapacitate guards.
Why it’s like Watch_Dogs: Well, Hacking is your main/only weapon, which you used to enhance your Stealth skills. You infiltrate buildings, avoid guards, and steal data. It’s the main Watch_Dogs missions in 2D!
Why it’s good: Every level is a puzzle. You can’t do it without working out a plan of attack. There are constantly new gadgets to try and new challenges to tackle. And the emphasis is on doing everything without being detected. Plus, the little guy’s just fun to fling around; he sticks to everything so it’s almost like your playing as Spider-man!!

What it is: An RPG hacking simulator focused on chance-based outcomes and upgrading your stats (computer/virus etc.). Work your way to the top by battling it out with every cracker in the Cyberpunk Directory.
Why it’s like Watch_Dogs: Well, obviously Hacking is a big part of both, but the Upgrading Your Abilities to Hack Others is also something they have in common.
Why it’s good: It’s a old-school hacking simulator. Get the genuine simulated feeling of what it was to be a hacker in the 80’s, fighting it out for supremacy, practising your skills by taking out BBSes and robbing banks. It feels a lot like a tabletop RPG, except it’s about computers and your playing on a computer.

What it is: A series of cyberpunk first-person stealth-action games focused on player choice and its effects on the world. You play as a secret agent with technological augmentations, which allow you to level up in an RPG-like way. They’re set in a not-to-distant future where several secret societies vie for control of the world.
Why it’s like Watch_Dogs: Both present Hacking and Stealth as ways of getting through sticky situation, but leave it up to Player Choice to decide what to do. Both also Reflect Player Actions in NPC Interactions, having them treat you more lovingly or aggressively depending on how you go about your missions.
Why it’s good: These games are renowned for the level of player choice they give you. I first heard about the original from a Gaming World Records book, because it holds the record for Least Violent FPS. Apparently you can finish the game having only killed 3 people; any other enemies can be taken out non-lethally.

So, that’s about it. What do you think of my list? How many of these games have you played? Which have piqued your interest? You can answer all these questions and more in the comments below, or through one of my other communication channels.