House Update: It Ain’t Over Til Your Data’s Back

So, a few weeks ago I told you about the plight of Jo, an employee at the House (where I work), whose hard drive in her laptop died. Her data was unrecoverable, and she decided to go to a data recovery specialist. I told you as a lesson in the importance of backing up. But that wasn’t quite the end of her story. Here’s what happened next… END_OF_DOCUMENT_TOKEN_TO_BE_REPLACED

House Update: Back Up, or Lose!

So, we had a woman come in this week with a company laptop, in which the hard drive had died. For us, it was a simple case of checking it, and getting a new one sent out. But for her, it was a lot more significant. Why? Because she hadn’t been backing up.

END_OF_DOCUMENT_TOKEN_TO_BE_REPLACED

House Update: How To Crash An iPad 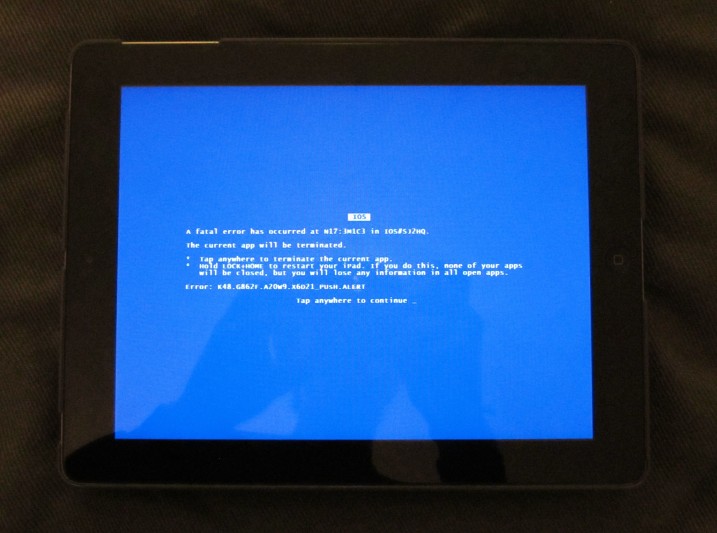 I actually created a fake iPad BSOD screen, as seen above. You can download it from deviantART and use it as a iPad background.

So, the title of this post isn’t exactly accurate, but it does tell some of the truth and I can see it’s drawn you in. I don’t have a fool-proof way of causing an iPad to crash. This is more of a list of problems that I’ve encountered with iPads over the last 4 or so months, including a few things that can cause them to crash.

When Mr Chief spoke at the meeting when the iPads were first given out, one of the things that he emphasised is that “you can’t break the iPad’s software.” He said this in the hope of encouraging those who are unsure about how to do things to have a go, and see if they can work it out for themselves rather than bug us about it or complain that it doesn’t work. Despite his good intentions, he’s not entirely accurate. iPads are like any other device; they’re not perfect.